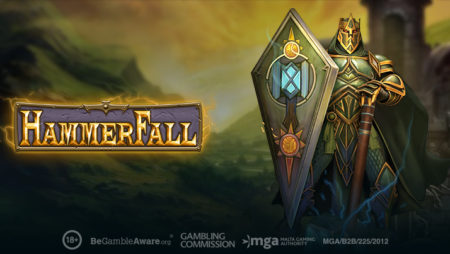 Play’n GO has teamed up with a legendary Swedish rock band for their latest release, HammerFall, out today.

HammerFall is based around the group of the same name, one of the most successful power metal bands in Europe, responsible for popularising and defining the sound of the genre alongside other bands like Helloween and Iron Maiden in the ‘80s.

While the game is a music slot, it mixes this element with a fantasy theme, broadening its appeal in the market. The story is based around HammerFall’s mascot, Hector the Paladin, as he aids players in a battle to victory and fortune, all set to the soundtrack of some of the band’s biggest hits.

HammerFall is packed with an array of exciting highlights, not least the song features that are activated by filling the charge meter and each takes the player to a different world within the game. Each one is based on a HammerFall track, and there’s also an opportunity to trigger the Hammer High Overcharge and experience all three song features in succession!

Since launching their series of music slots in 2018, Play’n GO has partnered with several renowned names in the world of rock, including Saxon, Twisted Sister and Testament. Each game has captured the tone and feel of its respective band, not only in its artwork but its gameplay and bonus features, something CEO Johan Törnqvist believes is very important to create the best game:

“Our music slots are a representation of ourselves and the band’s they feature. We don’t want to slap a few songs onto an average slot and call it a day; that’s not the way we work.

We work with the bands to capture their persona and make sure that the gameplay matches their style and their music, giving a well-rounded gaming experience to players, and it’s working.”