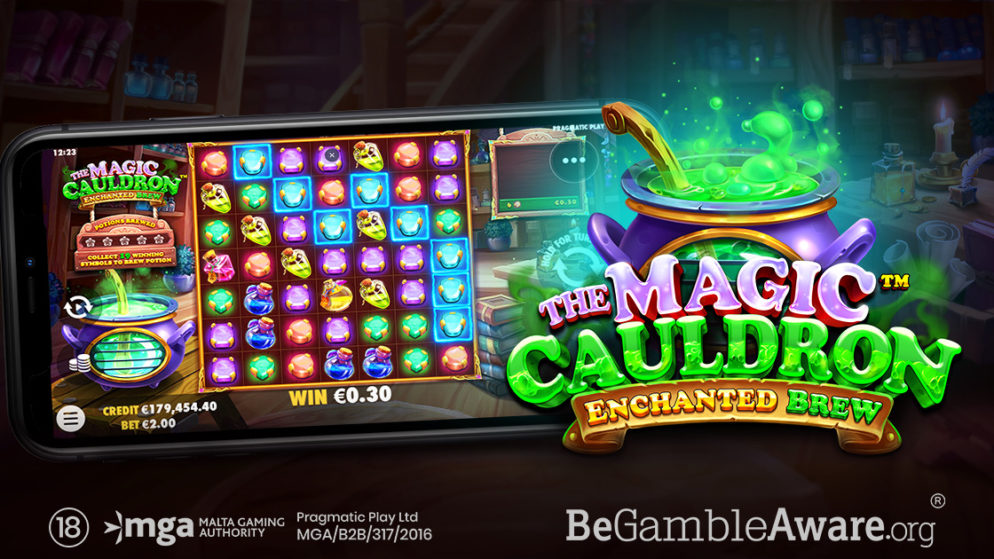 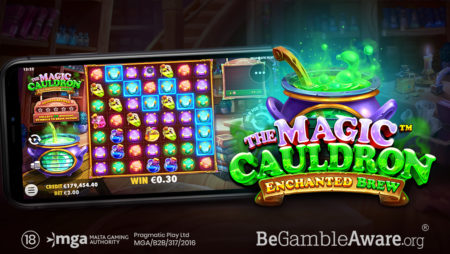 Pragmatic Play, a leading content provider to the gaming industry, takes players to a world of spells and magic potions in its latest slot release, The Magic Cauldron – Enchanted Brew. Play for free at Tipbet casino, or register and take advantage of the Tipbet casino bonus offer.

Utilising a 7×7, tumbling reels game engine, the provider’s spooky new title takes place in a lively potion brewing room and showcases a host of progressive features, as well as modifiers that bring a collection of multipliers into play.

Wins are formed by landing clusters of five or more matching symbols on adjacent reels, and with two different types of Wild symbols that can create winning combinations by substituting other symbols, guaranteeing big wins.

The slot contains the Tumble and Progressive features, with the latter causing winning symbols to be added to the cauldron on the left side of the reels, creating an enchanted brew. Once 25 symbols have been collected, players will randomly receive any of the four different modifiers that will be applied to the reels after the feature ends.

The modifier is picked at random, with each offering something different. Befuddlement turns all high value symbols into low values, while Invisibrew removes all low valued symbols from the reels, resulting in a new tumble. Balm of Transfiguration will also turn a random low paying symbol into a high paying one.

Enlargement Ale causes a block of 3×3 or 4×4 sized symbols to appear randomly on the reels, and players who land an elusive fifth modifier are awarded either the Unicorn Dust or the Potion of Darkness feature, the latter seeing lower symbol values being replaced with higher values.

Thanks to the exciting mix of modifiers that players can enjoy once the cauldron is filled with symbols, there is always the potential for a huge pay out of up to 5,000x the player’s total stake!

The Magic Cauldron – Enchanted Brew is the supplier’s newest hit, which joins the top-performing Sweet Bonanza and the multi-award-winning Wolf Gold, amongst the 200+ HTML5 titles in Pragmatic Play’s award-winning games portfolio.

Yossi Barzely, Chief Business Development Officer at Pragmatic Play, said: “The Magic Cauldron – Enchanted Brew is another spell-bounding title that we are proud to add to our immersive product range.

“Taking the theme in an entirely new direction from recent releases, we cannot wait to see how the supernatural slot is received by our global audience.”