Wazdan explores by moonlight in feature-filled Midnight in Tokyo 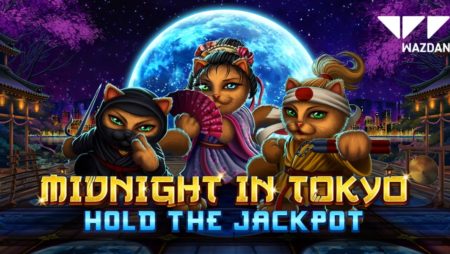 Wazdan, the innovative slots supplier, is set for a brand-new claw-some Asian adventure in its latest hit Midnight in Tokyo.

The supplier’s immaculate new slot game is a 5-reel, 243+ ways to win escapade combining a number of the developer’s most popular features in the latest instalment in its Hold the Jackpot series, with players being able to win up to 3,000x their stake.

Two types of innovative Wild Splitters are present in the game, both of which increase the number of ways to win using Wazdan’s splitter mechanic. Wild symbols not only substitute for other symbols, but they also split the adjoining symbols – into 2 if there are two adjacent symbols or into 3 if there is one adjacent symbol. Ninja Cats slice symbols on either side of them, while Kung-Fu Cats split symbols above and below.

The Geisha Cat symbol acts as a Bonus symbol, where three of them landing on the reels will trigger the Bonus Jackpot Game. Utilising Wazdan’s Hold the Jackpot mechanic, players are transported to a 15-slot mini-grid in a 5×3 layout as they search for further Bonus and Moon symbols. Players are initially granted three re-spins, which reset every time a new symbol lands on the reels.

The Moon symbol in this round will contain a cash value when it lands, with all of these being totalled up when the round ends before being awarded to players. The Geisha Cat, on the other hand, awards Jackpots, with five symbols granting the Major Jackpot of 150x and six Bonus symbols triggering the Grand Jackpot of 1,000x player’s bet. Since Jackpots, just like cats, act independently, after hitting Major Jackpot players can still score the Grand Jackpot, and have been awarded both of these prizes, instead of getting just the highest one.

Midnight In Tokyo also contains an array of Wazdan’s customisable features that players have come to love in its titles, including adjustable volatility, speed, and the Buy Feature, allowing players to enter the Hold the Jackpot bonus round at any time.

Andrzej Hyla, Chief Commercial Officer at Wazdan, said: “Midnight in Tokyo sees our players invited to explore the landscape of one of the world’s most famous cities while its feline citizens are up to mischief.

“With the Wild Splitters adding a unique twist to the reels and our popular Hold the Jackpot bonus round, Midnight in Tokyo is one of our most engaging titles yet.”

The new slot game Midnight in Tokyo is available today at Betwinner casino.