iSoftBet enters the world of predators in Tyrant King Megaways™ 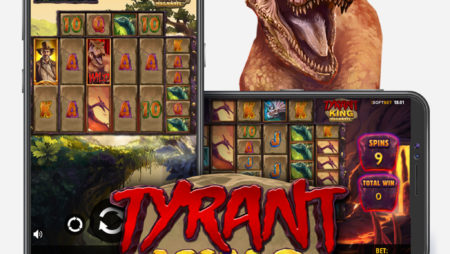 iSoftBet, the leading online games supplier and content aggregator, has unveiled its fearsome new Apex Predator series with the king of the beasts, Tyrant King Megaways™.

Set in the lands of the fearsome Tyrannosaurus Rex, the slot centres on the adventures of an intrepid hunter as he quests for huge riches among the dinosaurs.

The high octane, high volatility slot contains classic Megaways™ features such as cascading wins and increasing multipliers, as well as an innovative Tyrant King Respins mode, which is triggered when wilds land on each of the middle four reels. This awards three respins on reels 2 to 5, with only wilds in play, not including the top tracker, and wilds remain sticky for the length of the respins.

Tyrant King Megaways™ is the first in the provider’s Apex Predator series, which will encompass some of the most dangerous beings to walk the earth in iSoftBet’s latest creation. The new collection will bring a dynamic new gameplay to players, balancing the thrills of a hunt with an immersive adventure focused around iSoftBet’s heroic explorer, Hugo. The whole series is based on the idea of creating more than just a game and looking for an honest reaction from the players.

The carefully balanced artwork combined ferociousness with a vibrancy, with more titles to be added to the series in the near future. It follows the huge success of the Twisted Tales series, with Moriarty Megaways™ awarded the Game Narrative award at the recent CasinoBeats Game Developer Awards.

Mark Claxton, Head of Games, iSoftBet, said: “Tyrant King Megaways™ sees us start a whole new project in our Apex Predator series, where our intrepid explorer will encounter some of the most imposing creatures to ever stalk the earth.

“With huge win potential, a respins and free spins mode, which can be combined, and up to 200,704 paylines, there’s so much on offer in our newest title!”