Surf’s up, skin’s off – Zombies on Vacation is here 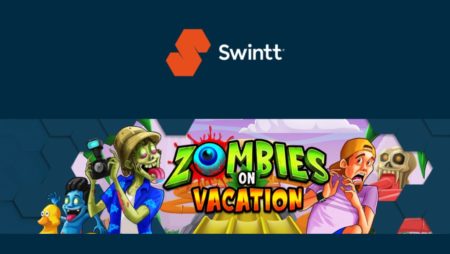 Software developer Swintt invites players to join them on the holiday of their Halloween themed new video slot.

With Halloween almost upon us and the land of the living getting dressed up for the occasion, the undead have decided to take a few days off and shuffle their way to an idyllic tropical paradise in the latest action-packed slot from Swintt.

Fresh from their storming recent successes with Sun Wild and Lone Rider XtraWaysTM, the hot shot software developers are inviting players to join these hell-raising holidaymakers in Zombies on Vacation – a new five-reel freak-out that features multiplier wilds, Free Spins and 243 ways to win.
Played out across a 5×3 reel matrix, the first thing players will notice about the game are its ghoulish graphics. Action takes place on a tiki-style island backdrop where shrunken heads and grasping hands adorn the reels, while high-value symbols include screaming tourists and four zombie sun-seekers.

Food for thought is provided by the game’s substitute wild symbol – a cocktail stick-garnished brain served up on a silver platter – while the scatter icon features three undead arms bursting from the sand; and both symbols play a major role in how the slot’s lucrative Free Spins bonus round plays out.
In order to activate it, players will need to land at least three of the aforementioned scatter symbols starting from the left-most reel. When they do, they’ll be taken to a new screen where they’ll choose how many Free Spins they receive, with fewer spins being compensated by bigger prize multipliers.

Once they’ve picked their Free Spins option, players will need to look out for the wild symbol, as any wins completed using this zombie sharing platter will be boosted by one of the three possible multipliers. Additionally, landing the screaming girl icon on reels 1 and 5 will award an instant prize.

David Mann, Chief Commercial Officer at Swintt, said: “Zombies on Vacation is a fresh new twist on the classic Halloween slot. With its gruesome graphics, signature sound and hair-raising bonus feature, we know players will have a scream taking it for a spin when it hits operator game lobbies this month.”