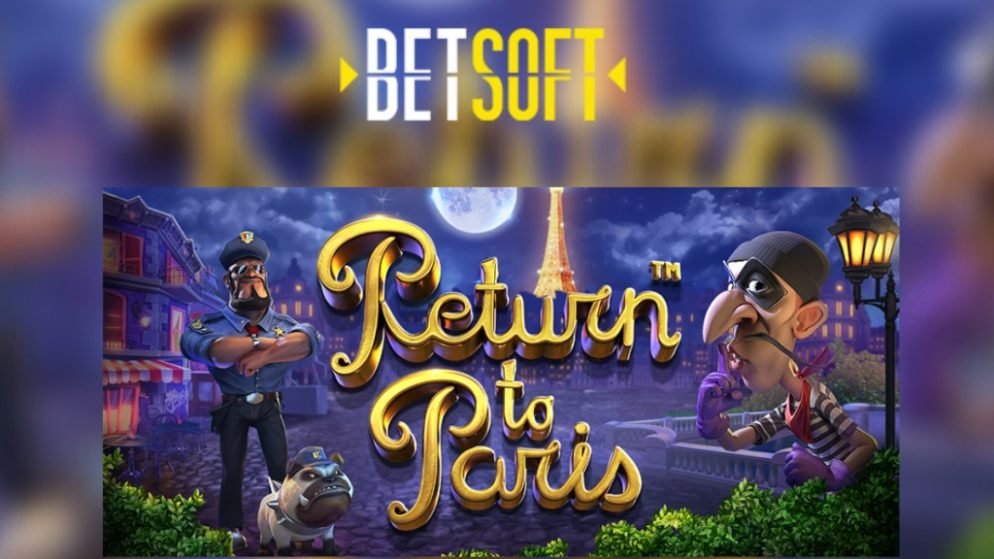 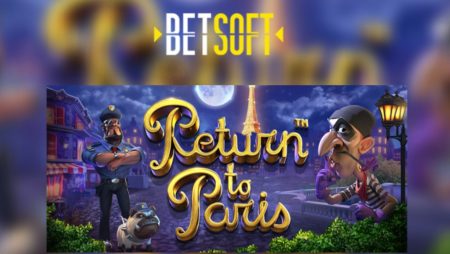 Renowned content provider Betsoft Gaming, once again shows its provenance as the market leader for true cinematic iGaming slots with stunning release Return to Paris™. Following the smash hit A Night In Paris™, the Thief with an eye for an antique is back – and so is the Cop, looking to hunt him down! Loaded with frequent wins, Multipliers, explosive Wilds and an engaging Free Spins round, this five-reel 20 payline slot is the cartoon crime caper of the year.

Welcome to Paris by night: the romantically lit boulevards and shimmering Eiffel Tower are the backdrops to the museum, full of priceless artwork – including the Mona Lisa – and the crown jewels. On duty is the Cop, ready to protect Paris’ artefacts from the light-fingered Thief. Each piece of stolen artwork has its own Multiplier – the more you recover from each symbol, the higher the Multiplier! It’s a race against time as the Thief must put his loot in the unique bar-counter under the grid and build up the Multipliers before the Cop catches up with him.

Studded with fabulous graphics, Return to Paris™ showcases Betsoft’s trademark cinematic skills. Jewels and statues are the high value symbols and a Monet-inspired painting is the WILD. The Thief steals a nearby symbol and stashes it in his collection whilst taking its place on the reels. Each theft increases the on-screen MULTIPLIER COUNTER by one and a random symbol will replace the stolen one as the Thief moves on. Spin the reels to find the Cop. With a screech of tyres and a wailing siren, he will chase the Thief around the grid to put him behind bars and return the stolen goodies. The player gets a win PLUS the built-up Multiplier. The Multiplier is then reset to 1 and the chase starts all over again.

The open-ended round starts with the Cop and the Thief in opposite corners of the grid. Each spin moves them vertically or horizontally in a random direction. The Thief continues to steal everything in his path, adding constantly to the Multiplier as the Cop chases him down.

Until they meet on adjacent squares, Free Spins will keep triggering – with up to 1,000 FREE SPINS to be had!

The trusty law enforcement officer will return all the stolen art at the end of Free Spins and the player will receive a Five of a Kind equivalent payout PLUS any built-up Multipliers from the symbols. The Multiplier is then reset to 1 and the chase is back on!

The Cop is no pushover, however: not content with just chasing the Thief and returning his ill-gotten gains, when they both appear adjacently on the reels – horizontally or vertically – things get hot. A bundle of dynamite rolls onto the screen and BOOM! All symbols become Wilds in the WILD EXPLOSION feature bringing even more big win chances your way.

Anna Mackney, Head of Account Management, Betsoft Gaming, said: ‘Betsoft Gaming has surpassed even its own legendary cinematographic skills with Return to Paris™. The incredible attention to detail makes this release fresh with every replay. The atmospheric soundtrack, with its Parisian street music, sirens, explosions and humorous mutterings, reinforces the theme fantastically well. This release sets a new bar in iGaming content and we anticipate a very positive response.’