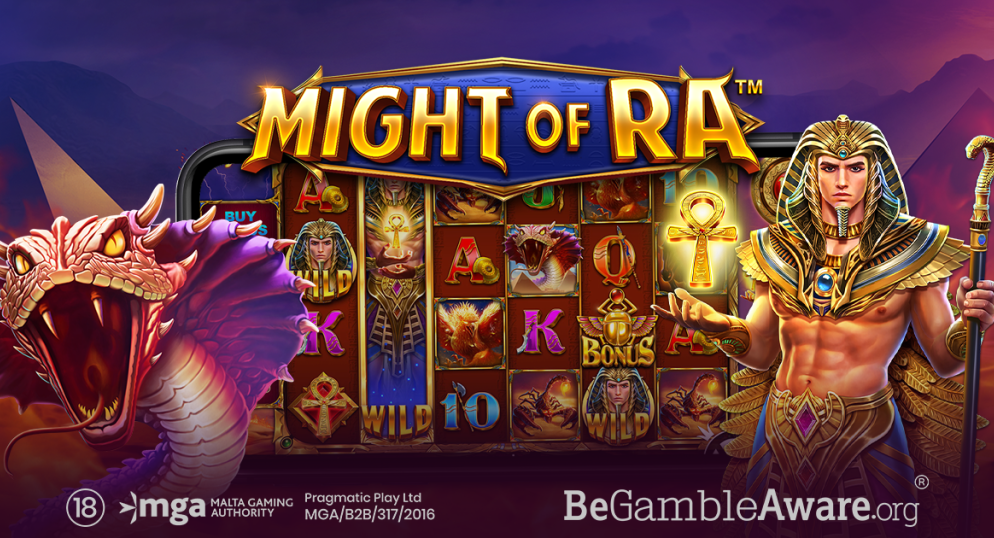 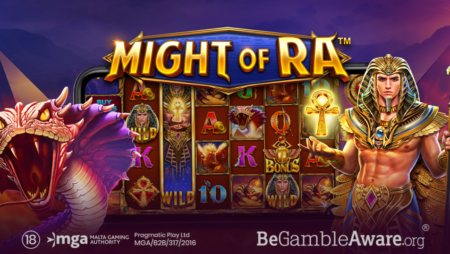 Might of Ra is the newest slot released by the best software provider Pragmatic Play this month. It is an Egypt themed casino slot with symbols that can payout up to 15x the bet. The bonus symbol in the Might of Ra slot activates the free spins feature and awards 15 free spins. The feature can be triggered for an additional three, six or nine spins. Read the press release below:

Pragmatic Play, a leading content provider to the iGaming industry, welcomes players to the sun-scorched reels in its bold new release, Might of Ra.

Players who match three or more adjacent symbols across the six reels will be rewarded with a win, while fiery-eyed Phoenix, Stallion, Scorpion and Serpent symbols provide them with high-value payouts worth up to 15x their bet.

The mighty Ra, God of the sun, order, kings and the sky, serves as the game’s only Wild symbol, while golden scarabs fulfil the role of the Bonus symbol, which can only land on the second, third, fourth or fifth reels.

Whenever one or more Wild symbols hit, they can randomly transform into a reel full of Wilds, providing a multiplier worth 3x the bet that applies to all winning combinations that include the Wild symbol.

Landing three or more Bonus symbols will trigger the Free Spins feature, which awards players 15 free spins, and each time an Ankh symbol lands, it is collected as players look to gain better rewards.

Players can track their progress on a meter next to the reels, triggering additional rewards by collecting five or more Ankh symbols. Might of Ra offers users the chance to win a mammoth 22,500x in the base game and free spins feature.

It is possible to retrigger the feature by landing two, three, or four Bonus symbols, which awards an additional three, six, or nine free spins, respectively.

Might of Ra arrives hot on the heels of recent releases Elemental Gems Megaways™, The Ultimate 5, and Colossal Cash Zone™, which reside amongst a collection of over 200 HTML5 titles in Pragmatic Play’s award-winning games portfolio.

Yossi Barzely, Chief Business Development Officer at Pragmatic Play, said: “Filled to the brim with extensive bonus features and modifiers, Might of Ra provides players with free spins and the opportunity to trigger big wins.

“Ancient Egypt remains a very popular theme with players, and we wanted to bring something exciting and new to operators and fans alike.”

Pragmatic Play currently produces up to five new slot titles a month, while also delivering Live Casino, Virtual Sports and Bingo games as part of its multi-product portfolio, available through one single API.