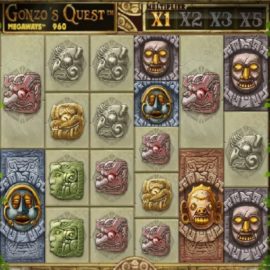 Gonzo’s Quest Megaways is a newer version of the original slot game. The slot has 117,649 ways to win and many bonus features.

Gonzo’s Quest Megaways is a tumbling reels slot game developed by Red Tiger Gaming. It is actually a version of the popular video slot Gonzo’s Quest that was released in 2011 by NetEnt.

The new Megaways slot follows the same story, about the Spanish explorer, Gonzalo Pizzaro. He went on an expedition to find the lost city of gold he heard about, named El Dorado. The design is the same, with enhanced visuals and upgraded graphics.

The important thing that is different between the two slots is the winning potential. Gonzo’s Quest Megaways has 117,649 ways to win. This is because, as the name suggests, this slot belongs to the type of slots called megaways. These slots can have 243, 1024, and over 100,000 ways to win. Gonzo’s Quest megaways has 6 reels, each displaying between 2-7 symbols per spin. The more symbols on the reel, the more ways to win.

This is the part where both slots are the same but different. What I mean by that is that the story and the design of the symbols, background, sounds are the same. But, all these things are significantly upgraded and is really noticeable. The quest is set in the jungle, which you will feel right away due to the impeccable enhanced background music and sounds. The animated Gonzo figure on the side is placed to increase the fun, collecting the coins when you line up a winning combination.

The symbols are mainly the same, the ceremonial Mayan masks, only in the Gonzos’ Quest Megaways slot are more detailed and look more real. Everything does look more real like you are on that journey together with Gonzo. The collaboration between Red Tiger Gaming and NetEnt is definitely a successful one, releasing an amazing product for the customers.

In this online slot game, the symbols reflect the theme completely. The traditional Mayan masks carved on a stone in different colours and the animal carvings on a stone are perfectly created with a lot of detail. There are a couple more symbols added in this slot, to fill up the 6 reels and the 7 rows. In the table below you can see all the paying symbols, with the payouts.

The most important feature is the Avalanche feature or the tumbling reels. The symbols fall into place on the reels from the top and once they create a winning line, those symbols disappear making space for new ones to fall down and replace them. With this amazing feature, multiple consecutive wins can be achieved in the same game round. This keeps going until there are no more winning lines matched.

As the first two features are the same as in Gonzo’s Quest slot game, the next feature is the Earthquake feature which is something new. At any point, the slot can start to shake randomly. This earthquake destroys the low-paying symbols and replaces them with high-paying ones for the next spin.

The Free Fall feature is related to the Scatter symbol which is the reason why it is known as the “free fall” symbol. The symbol appears only on the first, second and third reel and lining up three of them triggers the Free Falls feature, which is actually known as free spins in other online casino slot games. With the free falls feature you get 3 free falls for each free fall symbol, so for landing three symbols you get 9 free spins.

When you get free spins, the Royal Wheel feature then appears. You can choose to play with the number of free spins awarded or gamble for more free spins. You could end up playing with 4 or 25 free spins for example.

Another feature is Unbreakable Wilds which is related to the Wild symbol. The wild symbol can substitute any other symbol in order to make a winning combination. Now, when a wild symbol helps you win, it doesn’t break. Instead, stays on the reel to help in future winning combinations. However, you can only get two Wilds on the reels at the same time. The 1st one lands on the first three reels while the 2nd one on the second set of the three reels.