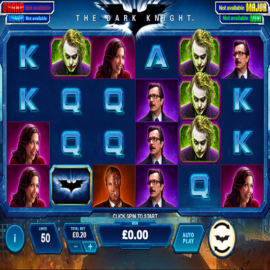 The Dark Knight is a casino slot game developed by Playtech as part of their DC branded slots catalogue. Casino software provider Playtech became one of the best in the industry due to this collaboration with Warner Bros to develop an extensive catalogue of DC-branded games.

The movie is the second movie of The Dark Night Trilogy released in 2008 and a sequel to Batman Begins, which is also part of Playtech’s branded slot games catalogue. The Dark Night Trilogy is based on the DC Comics character Batman, one of the most popular superheroes that everyone has heard of. The story is set in Gotham City where the menace known as the Joker creates chaos and is up to Batman to fight injustice.

The Dark Knight is not a classic 5 reel slot but has 6 reels, 3 rows and 50 paylines where wins pay both ways. The RTP is just a bit above the average, 95.96% but the volatility is pretty low. This means that your chances of winning are high

Along with the many bonus features this online slot game has, the progressive jackpot is the most attractive one, if you get to be the lucky winner.

You will definitely feel the tension of living in Gotham City while you spin the reels on The Dark Knight slot. The game features all the main characters, that seem pretty realistic while spinning in the middle of the chaotic city. The intense soundtrack perfectly complements the whole atmosphere, sending you on a journey in Gotham City, as a villain or hero, up to you. With high-quality graphics and an intense soundtrack, the slot keeps you intrigued while waiting for the big win.

As in the movie, the Dark Knight slot game includes the main characters in the gameplay. Batman of course is the symbol that pays the most, followed by the Joker. Also, there is Jim Gordon (Gary Oldman), Two-Face (Aaron Eckhart), Rachel Dawes (Maggie Gyllenhaal) and Bruce Wayne (Christian Bale). The other paying symbols are card symbols and the two scatters, the Batman Bonus symbol and the Joker Bonus symbol, that also unlock different bonus features.

The Wild symbol is the Bat symbol and can appear on reels 2 through 5. It then substitutes for all symbols, except the Batman Bonus symbol and the Joker Bonus symbol, in order to line up a winning combination.

The Batman Respins feature is triggered if the Batman symbol appears stacked on reel 1. All Batman symbols and WIlds lock on the reels and a coin is tossed. The coin has two sides, one is the Batman side and the other one is the Joker side. If the Batman side appears, you get another respin on top of the first one. On the other hand, if the Joker side appears, you get the payout from that spin and the feature ends. If a new Batman or Wild symbol appears with the respin, those are again locked on the reels and the coin is tossed again. The feature ends automatically after 8 respins.

The Agent of Chaos Free Games Feature is triggered if you land the Joker Bonus symbol on the 4th and 5th reels. With this feature, you get 7 free spins that can not be retriggered. Extra-large Joker symbols of random sizes can land on all reels to give you enhanced wins.

The Gotham City Free Games feature is a combination of the first two Free Games features. To trigger it, you need to land both, the Batman Bonus symbol on reels 2 and 3 and the Joker Bonus symbol on reels 4 and 5. Once triggered, Batman symbols become Wilds and lock on the reels after landing, plus, extra-large Joker symbols of random sizes can land on all reels to give you enhanced wins. When a large Joker symbol overlaps a locked Batman symbol, it becomes Wild and unlocks it. Again, this feature cannot be retriggered.

The Progressive Jackpot Bonus game can be triggered randomly, with any spin. Of course, the higher the bet the bigger the chances to triggers this jackpot bonus game. If you get lucky and trigger it, you are getting one of the four progressive jackpots. The jackpot game consists of 20 icons, each one with different colours, red, yellow, blue and green, corresponding to the Grand, Major, Minor and Mini jackpot. Once you open all the icons, you get the jackpot that corresponds to the highest number of icons with the same colour. So, if you uncovered most of the red icons, then you are the luckiest one because you will be getting the grand progressive jackpot.

Where to play The Dark Knight Slot game? 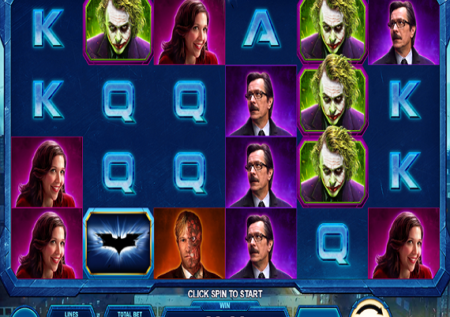 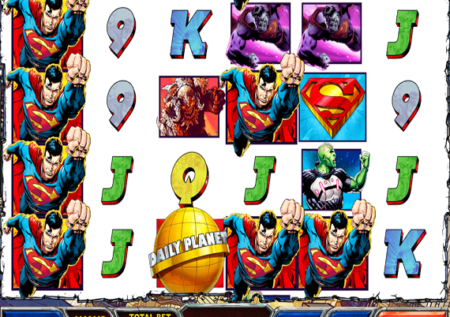